The first new social housing in the remote village of Rookhope for over 50 years has been completed, as part of a £30m project bringing affordable homes to County Durham.

A pair of two-bed bungalows in the heart of Rookhope have been officially handed over to County Durham Housing Group. The new homes are the first new social housing of any kind in the upper-Weardale community, which has a population of fewer than 300 people, since the post-war era.

The bungalows, on Boltsburn Crescent, are also the first of 300 new purpose-built affordable homes being constructed on 17 sites between now and 2020 by County Durham Housing Group.

County Durham Housing Group Chief Executive, Bill Fullen, said: “We hear lots of talk about the housing crisis in big cities, but affordable housing is just as much of an issue in a small rural village like Rookhope.

“These bungalows might seem like a drop in the ocean to some. But to the families who will be able to live in this village, they will mean everything.

“I can’t imagine the circumstances where a private investor would be able to deliver a project like this, which the community wanted and knew that there was demand for. But, this is exactly the type of project where County Durham Housing Group can come into its own.”

The bungalows feature high levels of insulation, the latest heating systems powered by solar panels, and double glazing. They are expected to bring big savings to tenants when compared with older homes in the village.  Demand for modern bungalows in Rookhope is high as most properties date back to the area’s lead and ironstone mining heyday, well over 100 years ago.

County Durham Housing Group is one of the region’s largest providers of affordable housing. Alongside the new properties in Rookhope, the group’s £30m new-build programme is creating new homes in communities like Pity Me, Bowburn, Crook and Seaham. As well as traditional affordable rent, construction is delivering ‘Rent to Buy’ homes, which will help hard-working families take their first step on to the property ladder.

The programme is also expected to create around 100 new jobs and apprenticeships. Construction at Rookhope was undertaken by Bishop Auckland based contractor T. Manners & Sons, further supporting the Weardale economy.

Simon Manners, Joint MD at T Manners & Sons Ltd and the fifth generation of his family to run the 157 year-old business commented: “It has been a real pleasure to work with County Durham Housing Group and deliver affordable homes in Rookhope. Our craftspeople are all locals to the county and so it feels special to be involved in this much needed project. We are pleased to be continuing our relationship with the group, building more bungalows at West Auckland and hope to do more in the future.”

Rookhope, which sits high in Weardale above Stanhope, was a busy centre for the buoyant lead and ironstone mining industries until the early 20th century. Once known as Boltsburn, the village expanded greatly to serve the industry; criss-crossed by railways and dominated by chimneys. Nowadays the peaceful village is perhaps best known for its position at the foot of the fearsome Bolts Law incline on the popular Coast to Coast cycle route from Cumbria to the north east.

Construction of 10 new affordable, family homes in a popular County Durham village could start within months after planning permission was granted in December.

The three-bed homes are part of a project to give hard-working families the opportunity to take their first step on to the property ladder and will be available under a rent-to-buy programme by County Durham Housing Group.

Rent-to-buy is a government scheme designed to ease the transition from renting to buying a home by providing subsidised rent; usually around 20% below the market rate.

Being built in Surtees Avenue, near the centre of Bowburn, the homes will feature the latest standards in heating and insulation, reducing energy costs for families.

County Durham Housing Group Development Manager, Tom Winter, said: “Bowburn has been chosen for the development due to high demand for affordable homes in the area.

“By offering these rent-to-buy properties we are able to help families who aren’t quite able to buy their own homes using traditional methods to take a step on to the property ladder. They’ll be able to build a long-term future in Bowburn, contributing to the future of the village.”

County Durham Housing Group will start the process for appointing a contractor in the New Year and will work closely with the successful contractor to ensure that disruption to nearby residents is kept to a minimum during the work. Work is planned to begin during summer 2018, with completion expected in 2019.

The homes in Bowburn are part of programme of construction across the region by County Durham Housing Group. In total 300 new homes will be built by the group on 17 sites between now and 2020. Each site is being tailored to the needs of the local community with properties ranging from wheelchair accessible bungalows to three-bedroom family homes. As well as rent-to-buy opportunities, many homes will be available for affordable rent too.

It is anticipated that the £32m investment in new homes across the region by County Durham Housing Group will create 100 jobs and apprenticeships.

DON'T GET BITTEN BY A LOAN SHARK THIS CHRISTMAS

Durham Key Options are working with the England Illegal Money Lending Team (IMLT) to steer residents away from borrowing from loan sharks in the lead up to Christmas.

A loan shark is someone who lends money illegally without the correct authorisation from the Financial Conduct Authority (FCA). Loan sharks normally appear friendly at first, but this behaviour soon changes once monies are owed.

Christmas is a prime time for loan sharks - these criminals are swimming around on housing estates, looking for the next vulnerable person to exploit.

It’s easy to fall in to the grip of a loan shark; they seem like friendly people at first, someone who you might refer to as a close neighbour or colleague.  You might find yourself short for money during the festive season, but borrowing from a loan shark could result in you paying back significantly more with extortionate interest rates and threats included. When taking out a loan from an illegal money lender, you will be left in the dark, not knowing much how much money you owe or the amount of interest you’re being charged on the loan as often no paperwork is given.

We understand it can sometimes be scary to ask for help, but if you call the England Illegal Money Lending Team’s hotline on 0300 555 2222, you can speak to a member of the team anonymously or in confidence. They are there to help, not judge, and will let you know what your options are so you can decide what to do.

In some cases, loan sharks have been known to resort to the most extreme methods to enforce repayment from borrowers. This has involved victims being subject to intimidation, threats and violence, leaving many frightened to leave their own home.

The England Illegal Money Lending Team (IMLT) can help people who have been a victim of a loan shark. The national team are a law enforcement agency who work with local Trading Standards authorities across the country to investigate and prosecute illegal money lending and related offences. The team have previously prosecuted loan sharks for other forms of criminality, including drug offences, kidnap and even rape.

The 50-strong team are made up of Investigators who work endlessly to bring loan sharks to justice and LIAISE officers who protect and support victims, and work with a number of partner agencies to raise general awareness of the issue.

The IMLT have secured more than 380 prosecutions for illegal money lending and related activity, leading to nearly 328 years’ worth of custodial sentences. They have written off nearly £72.5 million worth of illegal debt and have helped over 27,000 victims.

Residents are urged to never borrow money from someone if they:

Residents can check if someone is authorised to lend money by visiting the Financial Conduct Authority’s website and searching for a company, person or postcode through their Financial Services Register

To get help with debt and budgeting, visit your local Citizens Advice Bureau. If you need a cash loan or would like to open a savings account in preparation for Christmas, visit https://www.findyourcreditunion.co.uk/ to find your nearest credit union.

To report a loan shark: 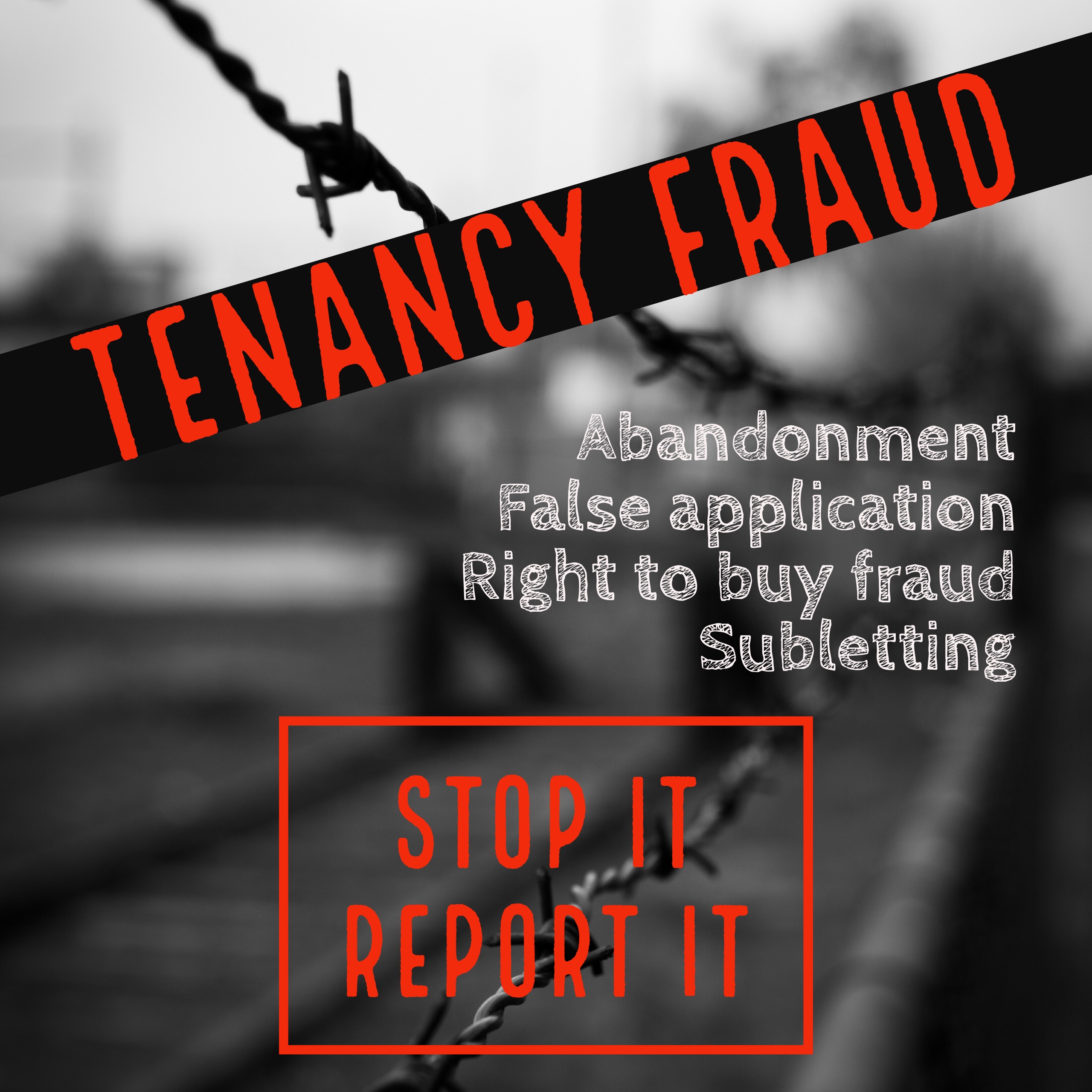 By tackling social housing fraud this will ensure that more properties for families in genuine need are made available. Good housing provision has been found to have a positive impact on education, health and the social care needs of a community, so the wider potential benefits to hard-working families are important.

“Durham County Council is determined to protect itself, its employees, the public and its partners from fraud and corruption. In order to do this, we are committed to developing a culture of zero tolerance."

To report tenancy fraud or any fraud against Durham County Council you can do so by:

In person: to any Council buildings

A County Durham town is to get 40 new affordable homes as part of a £30m investment programme, creating more than 100 new jobs and apprenticeships.

The new properties in Crook will include two and three bedroomed houses, as well as two and three bed bungalows. Contracts have been signed for the project at West End Villas, in the heart of the town, which is being delivered by a partnership comprising one of the region’s largest landlords, County Durham Housing Group and Galliford Try Partnerships North.

Featuring high levels of insulation, the latest heating systems and double glazing, the new homes are expected to bring big savings to tenants when compared with older homes, particularly those in the private rented sector.

Construction work is expected to be completed in stages during 2018, with the first families moving in shortly after. All of the new homes in Crook will be available for affordable rent.

County Durham Housing Group Development Manager, Tom Winter, said: “We all know that demand for affordable homes is really high right across the country at the moment. This new project in Crook will help to deliver new, high quality homes to families that really need them.

“We’re particularly pleased to be developing bungalows for customers that need them too. As a social landlord it’s great to be able to build homes that the private sector would not ordinarily be able to deliver.

The Crook properties are part of a major house building project by County Durham Housing Group that will see almost 300 new homes built on 17 sites stretching from rural Weardale to the Durham coast.

Galliford Try has contributed £1.2 million to the project from its 2015-18 Affordable Homes Programme (AHP) grant, secured from the Homes and Communities Agency.

Alex Ross, Development Manager with Galliford Try Partnerships North, added:  “Working closely with housing provider partners to improve the quality and choice of homes across the North East is a core aim and we are delighted to have been selected to deliver this project.”

An error has occured

An error occured while processing your request, please try again.